Posted by generated Posted on 11:25 with No comments 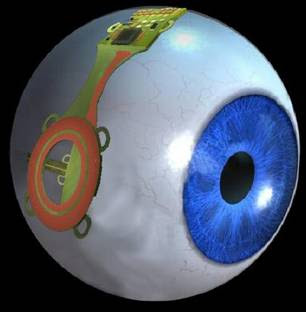 Now-a-days restoring sight can be performed in a number of ways. One of the most reliable and the best methods for the above operation is the Bionic Eye.

An artificial retina is formed by surgically planting a set of electrodes into the eye. However, the retina does not perform the function of vision. A small camera is placed above a pair of glasses. A small computer is used to process the information and transmitting it wirelessly to the artificial retina.

Though the vision formed is very poor, this technology is under the process of improvement.

Bionic eyes have been successfully implanted in two blind patients at Moorfields Eye Hospital in London.

A video camera and transmitter are worn on a regular pair of glasses. An implanted artificial retina receives the electrical impulses from the Argus II camera and sends the moving images along the optic nerve to the brain.

Although detailed images are not yet possible, the device can enable the patient to discriminate between rudimentary patters of motion, light and dark.

Mark Humayun, Professor of Ophthalmology and Biomedical Engineering at the Doheny Eye Institute in Los Angeles, California, which developed the technology, said:

“The camera is very, very small, and very low power, so it can go inside your eye and couple your eye movement to where the camera is. With the kind of missing information the brain can fill in, this field is really blossoming. In the next four to five years I hope, and we all hope, that we see technology that’s much more advanced.”

What is it like to look through a "bionic eye?" One of seeral American patients to be implanted with this technology remarked:

When I go to the grandkids’ hockey game or soccer game I can see which direction the game is moving in. I can shoot baskets with my grandson, and I can see my granddaughter dancing across the stage. It’s wonderful.”

Although bionic eyes are not to be found in the novel Cyborg, they were provided to Steve Austin in the television show made from the novel - The Six Million Dollar Man.

Retinal implants are able to partially restore the vision of people with particular forms of blindness caused by diseases such as macular degeneration or retinitis pigmentosa.

About 1.5 million people worldwide have retinitis pigmentosa, and one in 10 people over the age of 55 have age-related macular degeneration.

Both diseases cause the retinal cells which process light at the back of the eye to gradually die.

The new devices work by implanting an array of tiny electrodes into the back of the retina.

A camera is used to capture pictures, and a processing unit, about the size of a small handheld computer and worn on a belt, converts the visual information into electrical signals.

These are then sent back to the glasses and wirelessly on to a receiver just under the surface of the front of the eye, which in turn feeds them to the electrodes at the rear.

First-generation, low-resolution devices have already been fitted to six patients.

"The longest device has been in for five years," said Professor Humayun.

"It's amazing, even with 16 pixels, or electrodes, how much our first six subjects have been able to do."

Terry Byland, 58, from California was fitted with an implant in 2004 after going blind with retinitis pigmentosa in 1993.

"At the beginning, it was like seeing assembled dots - now it's much more than that," he said.

"When I am walking along the street I can avoid low-hanging branches - I can see the edges of the branches."

Mr Byland is also able to make out other shapes.

"I can't recognise faces, but I can see them like a dark shadow," he said.

The new implant has a higher resolution than the earlier devices, with 60 electrodes.

It is also a lot smaller, about one square millimetre, which reduces the amount of surgery that needs to be done to implant the device.

The technology has now been given the go-ahead by the US Food and Drug Administration to be used in an exploratory patient trial.

This will take place at five centres across America over two years, with 50-75 patients aged over 50.

If successful, the device could be commercialised soon after, costing around $30,000 (£15,000). Other devices could then be developed with higher resolution or a wider field of view, said Professor Humayun.

Future work includes studying the effects the implants have on the brain.

"We are actually studying what happens to the visual cortex over time," said Professor Humayun.

The research was presented at the American Association for the Advancement of Science (AAAS) annual meeting in San Francisco, US.
Reference :