Home » Do You Know » Smartphones are the new stethoscopes

Smartphones are the new stethoscopes

Posted by generated Posted on 21:32 with No comments 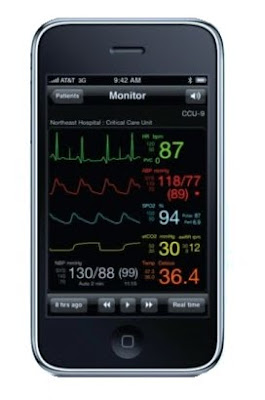 “The objective is to keep patients out of the hospital, which will substantially improve quality of life, and will reduce the burden on our heath care system,” said Mehregany, who sat on a wireless health care panel Thursday at the West 2010 communications-electronics show at the San Diego Convention Center.

Mehregany said soon, smartphones — like Apple’s iPhone or Google’s Nexus One — could be used to record snoring to detect sleep apnea, or scan barcodes on food packages to determine calorie counts. Inertial sensors that detect a phone’s vertical or horizontal movement could also be used to track activity and caloric expenditure.

Mehregany and Drinan said wireless health technology could save consumers from costly hospital admissions and readmissions.

Topol showed smartphone applications that track vital signs, including obstetrics for high-risk pregnancies; that allow cardiologists to measure the electric cardiogram of patients all over the world; that measure caloric intake and expenditure; and that monitors glucose levels every five minutes.

Using his iPhone, during the presentation Topol also showed the real-time vital signs of a patient in a Texas intensive care unit, and real-time ultrasound images of a pregnant woman in Sweden.

“This is a very exciting time,” he said. “Medicine is going digital.”

“Congestive heart failure is one of the largest and most problematic diagnoses in medicine today, with a tremendous toll on the quality of life of patients and an enormous economic burden to the country,” Topol said, when Wireless West and Corventis announced the trial. “But, fortunately, heart failure is prototypic for remote wireless monitoring.

“Through innovative wireless sensor technologies that use smartphones and broadband communication, we have the new capability of early and rapid detection of key parameters with a simple disposable smart ‘band aid’ that can relay the data on a continuous basis through the Internet.”

During the Consumer Electronics Show, Topol credited the fitness industry and Nike’s wireless system that communicates with an iPod for launching wireless health research.

Drinan said the atrial fibrillation patch could detect when a congestive heart patient requires a “20-cent diuretic” — which, in the long run, could avoid a “$6,000 hospital admission,” he said.

The key selling point is developing technology that increases preventative steps, leaders in the industry say.

“(Wireless health care) is empowering consumers to take charge of their health, like nothing ever before,” Topol said. “We’re entering a period of innovation and consumer-driven health care.”

Label: Do You Know