Home » Catatan , Do You Know » The Future of Healthcare is Human-Machine Interaction

The Future of Healthcare is Human-Machine Interaction

Posted by generated Posted on 22:39 with No comments
What doctors of the next century will need is not an Internet-enabled phone, but a specialized device for human-machine interaction that seamlessly works with single-purpose applications and hardware designed for healthcare (see visual examples below).

Consider the fluid interoperability of the iPod with iTunes, the Web, the MacOS, all the way to a finger-touch navigation wheel. It is an example of critical coupling. The mouse, when combined with a graphical operating system, is another. In the entertainment domain, the Wii controller embodies this principle, too. The Wii is far slower, has grossly inferior graphics, and much less computing power than its competitors, yet it is revolutionary because of its 3-Dimensional controller input. My 3 year old daughter was participating in the Olympics within minutes of learning how to use it.

Such fundamental breakthroughs happen once every 25 years or so. Steve Jobs, better than anyone else, gets this, but has not yet applied these principles to medicine. He could.

Doctors of the future will need instant bedside diagnosis tools, and instant access to a patient's consolidated medical information (e.g., Google Health's PHR), regardless of what facility they are in, to analyze how everything triangulates just-in-time.

It's not just computing power and memory that’s shrinking, but mechanical devices, and mechano-electrical signal transduction. For example, within a year LCD projectors will fit into a 1” cube. This overall convergence leads to astounding implications for medicine, if cleverly exploited. It means that Dr. McCoy’s Tricorder is actually possible – if someone can combine the right medical hardware, with the right software, with the right human interface design, with the right computing platform. Let's assume this device exists, and call it the iDoc. What could it do?

The first thing doctors do when called to an emergency is assess the ABCs – Airway, Breathing, and Circulation, because the human brain can only survive 5-6 minutes without oxygen and perfusion. Almost all the tools we need to make a diagnosis are not portable, with the exception of the stethoscope – which is why it is a worldwide standard of care. It’s simple to use, lightweight, and fits in your whitecoat pocket. It does not do that much beyond analog sound transmission, but like an abacus, it was better than paper and therefore useful for centuries.

Suppose that instead of a stethoscope, there was the iDoc. The iDoc would include the following Basic, Medically Foundational things, illustrated in the following clinical examples. Note that all of the technologies depicted in these scenarios exist right now – they have just not been minaturized yet. That is, there is no new basic science required to make these happen, only a technical execution path and vision.
EXAMPLE ONE

I am called to see a patient who is breathing rapidly, unresponsive, and agitated. I suspect the patient is not receiving enough oxygen. Within seconds of arrival, I place a sticker on the patient’s fingernail which connects to my iDoc. A light shines through the fingernail to measure the patient’s oxygen level in her blood. It is critically low (69%) and I immediately begin preparations to place her on a mechanical respirator and administer pure oxygen. 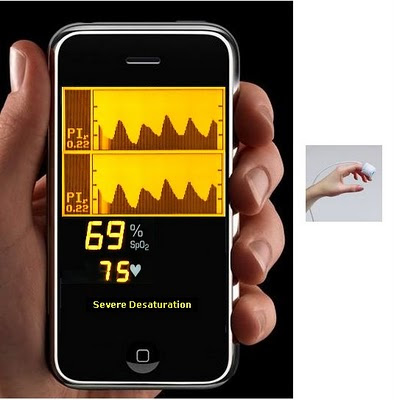 Pulse oximeters to measure patient oxygenation exist today, but weigh about 2-3 lbs and therefore are not universally portable to doctors. An oximeter is an optical device that measures blood oxygen level using a light that is shined through a vascular bed (fingernail, earlobe, or toe on an infant) and is presently the standard of care for surgery, emergencies, and intensive care. It is rarely utilized the first time a patient is seen, because it’s too troublesome to carry the device with you everywhere you go. iDoc would change that.
EXAMPLE TWO

I am requested to see a patient with distended neck veins, edema of the legs, and rapidly deteriorating mental status. I suspect the heart is not pumping blood adequately to the brain. I place a minaturized Doppler transducer on my iDoc over the patient’s chest and image the heart in realtime. I visualize regurgitation of a leaky heart valve (the blue jet below), and call a cardiac surgeon for emergency surgery to repair it. In such situations, minutes to hours to the diagnosis matter. 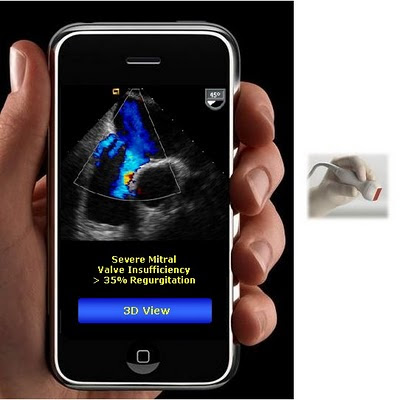 A portable device like this would make analog (physical) stethoscopes obsolete, because I could image organs in realtime, as well as listen to them. Today doctors spend years trying to remember the perplexing, barely audible permutations of heart sounds. Realtime digital analysis of acoustic signals would fundamentally change this. Bedside ultrasounds are presently about the size of a laptop, but again that’s too heavy for doctors to carry around, so we simply don’t do it. The iDoc would change that.

I am called to the Emergency Room to see a 7 year old child with aversion to light and severe neck pain. He is very febrile. I perform a lumbar puncture and obtain spinal fluid. I place a single drop onto a test strip, insert this into a disposable sensor that communicates with the iDoc. The test strip is a DNA microarray which does bedside nucleic acid analysis, and looks for matches for thousands of infectious organisms simultaneously. I receive an answer, without leaving the patient: 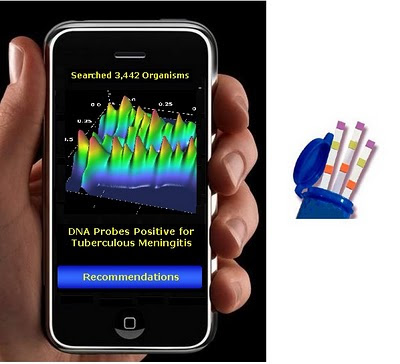 In severe infections like meningitis, a few hours’ delay in starting the right antibiotics can mean the difference between vision and blindness, hearing or deafness, or survival. Today, bedside cholesterol and serum electrolyte measurement can be done in about 90 seconds using a device weighing a few pounds. DNA probes (using polymerase chain reaction for signal amplification) are also nearly ubiquitous for the many common causes of infection. Again, its presently impractical for doctors to carry these devices with them everywhere, so we don’t. But in the future, we won’t have to.

I am called urgently to the ICU to see a patient who is agitated, intubated with a breathing tube, and on a mechanical ventilator and intravenous infusions to support his blood pressure. My iDoc auto-synchs wirelessly with the sophisticated devices the patient is connected to, including his IV infusion pump. And it analyzes the data arriving from them, in realtime to indicate clinical alerts. As a first response, I have increased the oxygenation to 100%, and the pressure driving of the ventilator, but the patient is worsening. I request an analysis of the pattern of respiration, and the iDoc suggests there may be an airway obstruction. Upon checking the breathing (endotracheal) tube, I locate a mucous plug, suction it, and recitify the problem before a disaster occurs. 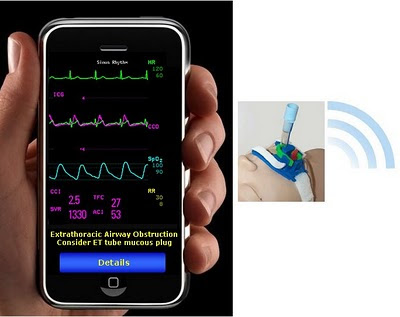 Bluetooth can connect the majority of clinical devices today; the only challenge is to establish consistent, shared protocols for clinical data. This will sort itself out, but a powerful, portable supercomputer will still be needed to gather it all, and make sense of it.

An elderly passenger faints and collapses while on an airplane. The pilot asks if there is a physician available and prepares for an emergency landing. Fortunately, a doctor with an iDoc is onboard. She sees that the patient is breathing but not responsive, and has a very thready pulse by palpation. The doctor quickly places three stickers on the patient’s chest to obtain an EKG signal of the heart. This takes about 30 seconds. It shows: 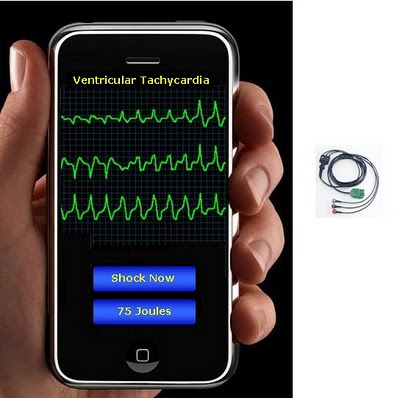 The EKG analyzer recommends immediate defibrillation (shocking of the heart) at an energy level of 75 joules to restore rhythm. The iDoc can typically deliver ten shocks before draining its battery completely, but in this case it only took only two to save the patient. Fortunately, the doctor had a fully charged iDoc before boarding the plane.

An EKG with a defibrillator today weighs about 3-5 pounds, again too heavy to be carried by physicians, but it’s shrinking very rapidly.

The iDoc Is Not Software On An iPhone

Again I stress in each of the above examples that the iDoc is not just displaying images from a network. The iDoc is NOT a software application platform, but a special-purpose medical device founded upon a Super-iPhone. It sounds like a lot to ask for, but it can happen.

All of these technologies already exist. They are just not small, portable, or integrated, and have yet to be coalesced into a single coherent vision (hint). As a result, healthcare is delivered in virtually every country in the world using a universe of fragmented, disjointed devices, whose use is utterly inconsistent between patients and locations, and whose value, in the moments that matter, is largely unavailable because they are not pocket-able.

In summary, the iDoc would fundamentally change medicine and revolutionize the care of the ill. It would be universally portable, instantly usable, and lifesaving. The implications of its existence might be equivalent to that of the first personal computer, and considering the stakes, possibly larger.