Posted by generated Posted on 01:42 with No comments 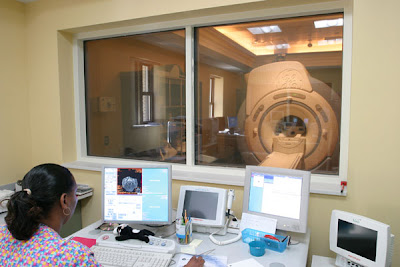 Want to buy an MRI unit ?

See First platform and the price offered, which is match with the specifications and desires. Life cycle cost analysis tools will also be considered caused MRI requires such investment of funds.

With an open auction system and platform that we have set and we calculate and specifications plus units from different vendors and service agreement contracts that they agree. We can choose and get a good MRI units and guaranteed in terms of service and operational.
One of the things that we can take as a reference, for example:
MRI's Magnet Types

In a case study

As the name suggests the Magnetic Resonance Imaging MRI consists of 2 parts of the discussion and Resonance Magnet. The system components are the most magnetic. MRI using a 0.5 Tesla to 2.0 Tesla (5000-20000 Gauss).

1 Tesla = 1 weber/m2 = 104 gauss = 109 gamma (γ) = 1 nanotesla (nT)
Where the Earth's magnetic field is about 0.5 Gauss or equal .000005 Tesla
When a person goes inside the powerful magnetic field of the scanner, the magnetic moments of these protons align with the direction of the field.

A radio frequency electromagnetic field is then briefly turned on, causing the protons to alter their alignment relative to the field. When this field is turned off the protons return to the original magnetization alignment. These alignment changes create a signal which can be detected by the scanner. The frequency at which the protons resonate depends on the strength of the magnetic field. The position of protons in the body can be determined by applying additional magnetic fields during the scan which allows an image of the body to be built up. These are created by turning gradients coils on and off which creates the knocking sounds heard during an MR scan.

Diseased tissue, such as tumors, can be detected because the protons in different tissues return to their equilibrium state at different rates. By changing the parameters on the scanner this effect is used to create contrast between different types of body tissue.

Problem is, how to generate a magnetic field in MRI depends on the magnetic system is used MRI. 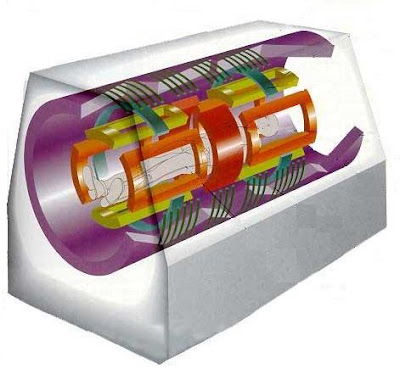 Fig. MRI Machine
There are 3 types of magnets that can be used in MRI, namely :

• Resistive magnet
Resistive magnet consists of layers of wire windings around a cylinder in which electrified. This causes the magnetic field formed, if the electric current is turned off then the magnetic field will be lost. Magnetic type is more affordable than superconducting magnets, but uses a high electrical energy (up to 50 kilowatts) to operate due to resistance from the cable.

• Permanent Magnet
As the name "permanent", the magnetic field generated by permanent magnets attached to the instrument, so that does not require energy to maintain the magnetic field. The disadvantage of this type of magnet is a tool that becomes very heavy. Will need a lot of magnets for generating magnetic fields between 0,5-2,0 lead Tesla instrument will be more difficult to make.

• Superconducting magnets
This type of magnet most frequently used. superconducting magnet system together with a resistive magnet in which there are cables that pass around the cylinder in which an electric current. That distinguishes it is the cable shrouded in a cold layer formed from liquid helium temperature 452.4 below zero, so that in this type of use "vacuum flask" to isolate the cold in order not to spread out. Very cold temperature causes the resistance of the cable will be reduced to zero. Although the superconducting system is still very expensive, but this system will easily generate a magnetic field.

So, where the most recommended?

That depends on your budget and needs have required, but with a maximum MRI specifications and good will certainly produce a good image quality with a cheap cost.

So, let us look at the advantages and disadvantages of each magnet system above ...

1. Resistive magnet
A resistive magnet is made up of thin aluminum bands wrapped in a loop. When electricity is conducted around the loop a magnetic field is created perpendicular to the loop. In an MRI system, four resistive magnets are placed perpendicular to each other to produce a consistent magnetic field. As electricity is conducted around the loop, the resistance of the loop generates heat, which must be dissipated by a cooling system.
- Lower in cost construct
- Current supply must be stable, maybe require huge amounts of electricity (up to 50 kilowatts) to operate because of the natural resistance in the wire. How about electricity supply at your hospital ?
- Current produces heat (50 kW at 0.15T) through resistive turns.
B  I so Heat produced  I2

- Water cooling is required, very high fields are not practical.

2. Permanent Magnet
It's weight and cost of the magnet and supporting structures . In Addition, permanent magnet are susceptible to hysteresis ( a time - varying change in the field ). They are used commonly for low cost systems; the cost (and weight) of the magnets has precluded their use at higher field strength.
- It is constructed out of a ferromagnetic material, is quite large, and does not require electricity to run. It also provides more flexibility in the design of the MRI system. However, the stability of the magnetic field the permanent magnet generates is questionable, and its size and weight may be prohibitive.
- Flux line divergence in air (homogeneity issue as well)
- There is no requirement for additional electrical power or cooling, and the iron-core structure of the magnet leads to a limited fringe field and no missile effect. Due to weight considerations, permanent magnets are usually limited to maximum field strengths of 0.3T.
- 20 -30 Tons Iron; 5 Ton Neodymium Alloy
Advantage :
- Open configuration possible
- Potential variety of easy-patient-access geometry

3. Superconducting magnets
> Recommended for hospital
- That has no resistance when operated at temperatures near absolute zero(-273°C, -459°F). Such magnets must be cooled by, for example, liquid helium. Superconducting magnets typically exhibit field strengths of >0.5T and have a horizontal field orientation, which makes them prone to missile effects without significant magnetic shielding.
- So very low levels of electricity are needed
- Always ON
- Very stable (0.0001 G/hr) and uniform
- To limit magnet installation constraints, the device has a shielding system that is either passive (metallic) or active (an outer superconducting coil whose field opposes that of the inner coil) to reduce the stray field strength.
Disadvantages :
- Very Expensive
- Maintained by liquid (He) that those liquids be refilled periodically
- Coils become resistive, He turns to gas

So which is your choice, you have to decide.