Posted by generated Posted on 10:07 with No comments 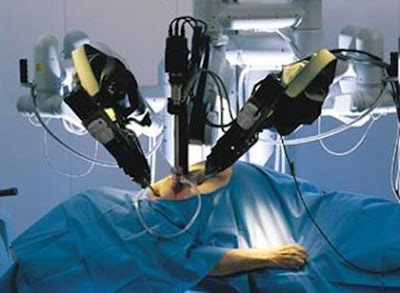 Two hundred times a year Dr. Thomas Ahlering peers into a cavernous opening, grabs hold of his rescue tool, and reaches out to save a man's life.

The opening looks like a cave, but it's actually the interior of a patient's lower abdomen seen through the eyepieces of the Da Vinci surgical robot, which is the tool that Ahlering uses to remove cancerous prostate glands.

Ahlering, 54, was trained in traditional open surgery, but in the past few years has turned himself into one of the world's leading urologists specializing in robot-assisted laparoscopic surgery.

"You have to get used to a new perspective," he said. From the viewpoint of the robot's camera inside the patient, the prostate, bladder, nerves and rectum can appear as part of the ceiling, walls and floor of a chamber.

Unlike traditional surgery, "you're not at arm's length, but right down in the thick of it. With laparoscopic surgery, you have to learn to operate on TV in a cavernous space," Ahlering said.

As a surgeon at UCI Medical Center in Orange and a professor at the UCI School of Medicine, he's an innovator who has refined the techniques of robotic surgery and trains other doctors to operate in the same way. He and other expert surgeons also consult with Intuitive Surgical of Sunnyvale, the manufacturer of the Da Vinci robot, on how to improve the device itself.

"He's a true pioneer in advancing techniques to make operations better for patients," said Ryan Rhodes, senior director of worldwide marketing at Intuitive. Ahlering's achievements include finding ways to remove as much cancerous tissue as possible while avoiding unnecessary damage to nerves that regulate erection and urination, Rhodes said.

Impotence and incontinence are common side-effects after prostate surgery, and Ahlering isn't satisfied with what he has achieved so far.

"Most men do get dry," he said, "but I'd like to shorten the time it takes to achieve that. For a man who would have taken three months, it should take only one month." 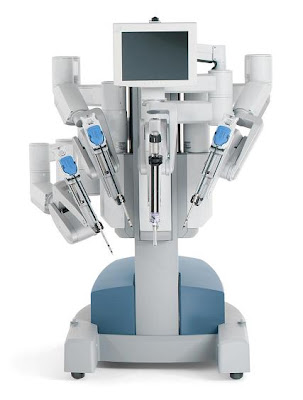 That's possible with the Da Vinci robot, he said, because it allows more precise surgery. Three robotic arms and a camera, inserted into the abdomen through small incisions, are controlled by the surgeon, who sits at a console near the operating table. The camera provides a close-up view. The robotic arms, with scalpels and forceps at their tips, move at the doctor's command and are steadier than the hands of the best surgeon, Ahlering said.

The Da Vinci robot, approved by the U.S. Food and Drug Administration in 2000, was named for Leonardo da Vinci, the Renaissance painter and scientist who was among the first people to design a robot. Intuitive Surgical accepts the fact that its technology is called "robotic surgery," but doesn't call its device a true robot since the machine cannot be programmed and performs no functions independent of the surgeon's immediate control.

When UCI Medical Center got its Da Vinci system in 2001, the device was the first one west of the Mississippi River and the second one worldwide.

Since then, 719 Da Vinci robots have shipped worldwide, including 545 in the United States and 119 in Europe, at an average cost of $1.5 million each. They're at Hoag Memorial Hospital Presbyterian in Newport Beach, Children's Hospital of Orange County and St. Joseph Hospital in Orange, and one is being installed at Mission Hospital in Mission Viejo.

Robotic prostate surgery has rapidly grown in popularity, Ahlering said. In 2005, about 18 percent of prostate operations were by robot-assisted laparoscopy. This year, he expects that to jump to more than 50 percent. 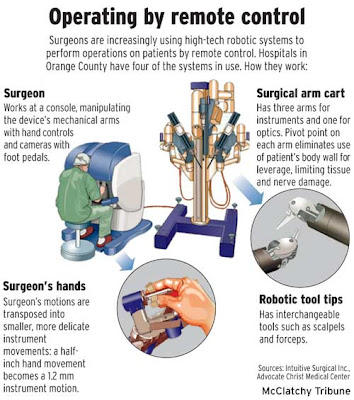