Posted by generated Posted on 11:09 with No comments 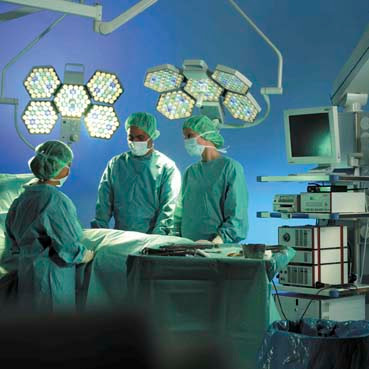 Based on semiconductor connections that convert the current directly into light, LEDs have numerous technical advantages over conventional halogen and gas discharge lamps, the most important being low heat emissions, adjustable light features and an almost indefinite life-cycle.

For the first time, the light temperature can be adjusted between 3,500 and 5,000 Kelvin. This means that, regardless of whether surgeons are operating on tissues in which the blood flow is heavy or light, they can make contrasts more visible by changing colour temperatures.
The homogenous lighting system above the intervention area is also decisive. Trumpf therefore also used a multi-lens matrix to distribute light volume emitted by the LEDs as evenly as possible. ‘The lamp consists of three or five segments positioned next to one another, each of which has a multitude of single convergence lenses. They look like the compound eye of insects. Because each of the LEDs has its own convergence lens, each also generates its own light field. That’s how you get up to 180 individual light fields in different amounts. Placed on top of one another, they combine into a very homogenous and shadow-free light,’ the manufacturer reports.

Surgeons who have tested the iLED prototypes said the are like a ‘3-D light’. ‘The illumination is considerably better than with traditional lights and creates absolutely no shadows,’ said Dr. Peter Sauer, Senior Physician at Surgical Clinic I, Inglostadt Clinic, Inglostadt. ‘The iLED provides optimal depth illumination for every situation.’

The total luminosity of iLED amounts to 160,000 Lux. LEDs can be adjusted individually, so different shadowing effects in the operating room can be considered, e.g. if a surgeon’s head moves directly under the lights, the iLED still provides shadow-free lighting. In addition, for the first time certain zones in the lighting field can be turned off, concentrating light intensity on the remaining LEDs.

During endoscopy, the light can be dimmed across an unusually broad range of 10-100%.
The ‘cold’ IR-free light of the LEDs means that even directly under the lamp, practically no heat emission can be felt. 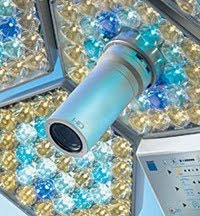 Nature as a model – the iLED has a completely new kind of design, one taken from nature. The domed compound eyes of insects are comprised of countless individual eyes. Each individual eye has its own optical lens system. The design of the multi-lens matrix of the iLED is based on the same principle; it distributes the emitted light volume uniformly in the room.

High-performance LED – the light technology of the future – the iLED from TRUMPF brings advantages of an LED light source into the operating theatre: high light output, extremely long life cycle and IR-free light to reduce heat.

A cool light head due to cold light – in comparison to conventional halogen and gas discharge lights, the “cold” IR-free light of the iLED practically avoids temperature increases in the area of the head.

Long lasting light sources – with a life cycle of at least 20,000 operational hours, the iLED provides illumination many times longer than conventional lighting. Each LED can be replaced individually at the installation site.